It’s a reality. Resident requests come in every which way. Local government is complicated.

How can local government make sure nothing falls through the cracks? Software is one part of the solution. Having a SOP (standard operating procedure) is the other.

DRAFTING A SOP THAT WORKS

In 2015, Belleair, Florida’s town manager met SeeClickFix at a conference and thought that the 311 workflow solution could benefit the town of 4,000. With ~50 full-time and ~30 part-time employees, town staff were wearing many different hats. Voicemail was the main way requests were managed. It was hard for residents and staff to get public service requests to the right people.

After some initial successes, Belleair decided to standardize the town’s approach to SeeClickFix in a SOP. The results were remarkable. 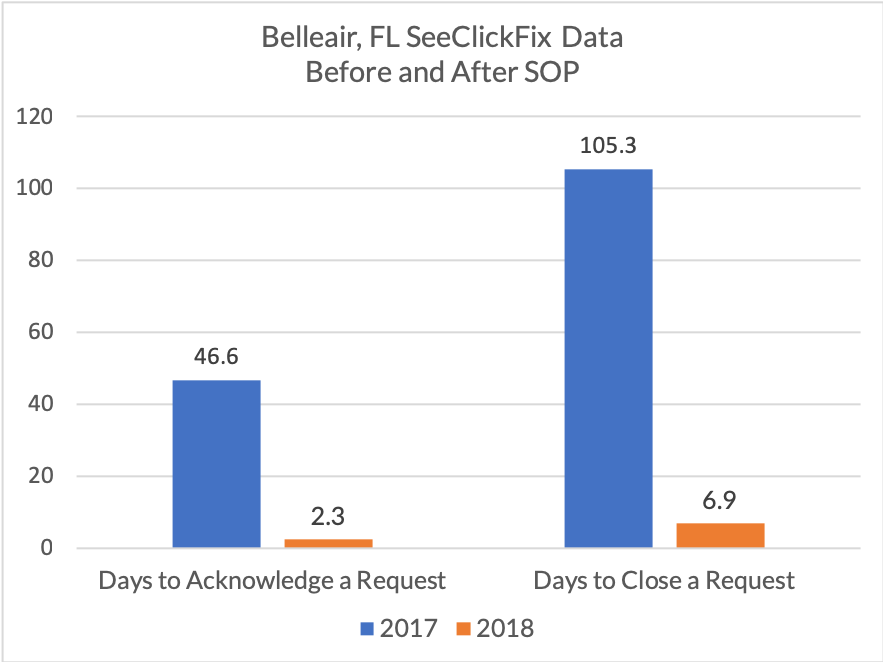 In reality, Belleair staff was performing far better than their SeeClickFix stats let on. The problem was that staff weren’t using the tool consistently.

Cathy DeKarz, Management Analyst for Belleair, got staff in a room to hammer out their SeeClickFix SOP. They started by asking a coworker, who lived in town, how long she expected (as a resident) for it to take a request to be acknowledged. She answered one day. That became the goal.

By involving staff in goal setting, Cathy enrolled them in the process. After the SOP was ratified everyone signed the document as a symbol of their commitment to the job ahead. Now, every new Belleair employee reviews the SeeClickFix SOP as part of their on-boarding. Long live the SOP.

Ready to systematize your communications and workflow? Schedule a time to talk.

Cari started at SeeClickFix in 2014 as a client success manager.  Cari then became director of customer success for SeeClickFix as the company grew.  Last July, she was promoted to Solutions Director for CivicService to utilize her expertise and client experience for product strategy and development.     In addition to graduating with an MBA from Southern Connecticut State University, Cari's prior adventures include marketing for the architecture firm responsible for the restoration of the U.S. Capitol dome, serving on a humanitarian hospital ship in Africa, and working for a U.S. Congresswoman.  Cari lives near Denver with her husband and two kids.  On the weekends, you're likely to find Cari hiking the mountains foraging for wild food, paddle boarding a Colorado lake, or helping with the music/photography studio she co-owns with her husband.