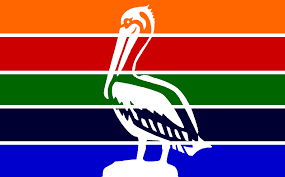 According to NOAA’s Climate Prediction Center, 2020 is bound to be an above-average hurricane season, with 3 to 6 major storms of 111 mph or higher. SeeClickFix sat down with David Flintom, director of the City of St. Petersburg, Florida Mayor’s Action Center to learn how the city uses SeeClickFix before, during, and after a hurricane.

“During a storm event, when staff is sitting in our emergency operations center looking at SeeClickFix issues coming in, we use the data to triage requests and walk high priority ones over to emergency management staff.” 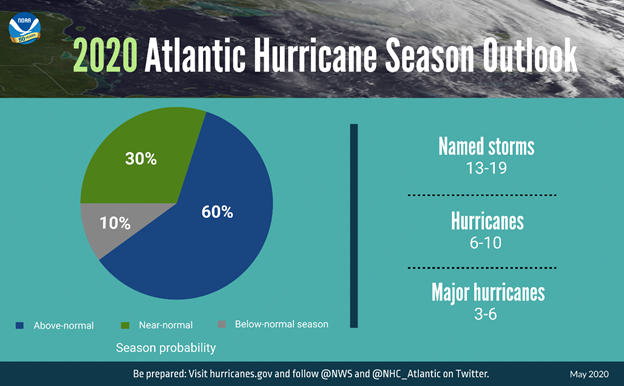 Why did the City of St. Pete sign up with SeeClickFix?

We got SeeClickFix in 2014, so our citizens could let us know where the problems are, so we could focus on fixing them. Our first real test of SeeClickFix, as a tool in our hurricane response arsenal, came in 2017 with Hurricane Irma, which turned out to be the costliest storm in Florida’s history. 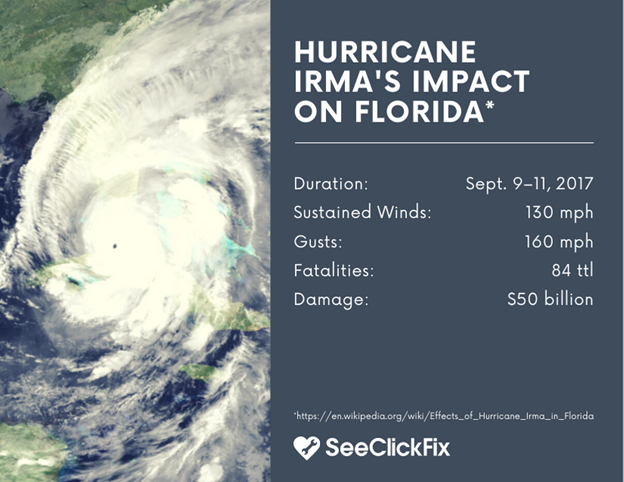 Has the City’s hurricane response changed because of SeeClickFix?

Absolutely. We still reach out to residents via traditional media — TV, print, and radio — but SeeClickFix is unique. With SeeClickFix, everyone has the power to communicate directly with the City right in the palm of their hand. We encourage residents to communicate with us during and after the storm so we know where the issues are. We want residents to let us know where the problems are, we’ll put them on the list, and we’ll get to them as soon as we can.

How do you use SeeClickFix to prepare ahead of a hurricane?

Unlike a tornado, we have days to prepare. We start with SeeClickFix Notices to push out messages like how the hurricane is tracking when shelters will open and when evacuations will be. Plus, helpful reminders like remember to bring in things that could blow around and become projectiles. 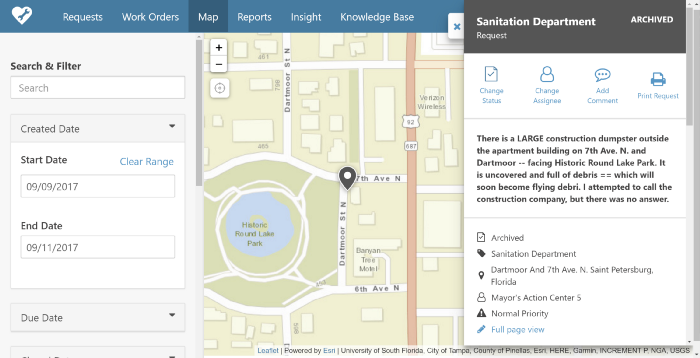 We also reduce the number of request categories that we’re exposing in SeeClickFix to the ones that we really need to focus on when we’re looking down the barrel of a hurricane. For that roughly 72-hour period surrounding a storm event, we don’t care about code complaints or graffiti, or broken sidewalks. We can get to those once the storm is gone.

But, what we do care about are storm-related issues like a tree in the road or a power line down or street flooding in a particular area. So we turn off some of the nonessential categories and turn on storm-related categories so people can easily, if it’s safe to do so, go out and see what issues are around them and report them to us.

How do you get the word out about SeeClickFix?

Every year we have a hurricane preparedness expo where we have residents come into a city facility, like a rec center, where we have community partners giving out information about how to plan for a hurricane.

Well, this year with COVID-19, we couldn’t do that. Instead, we set up a drive-thru in the parking lot of the rec center ,where we had information on all these topics packed into premade bags. We included a rack card about SeeClickFix and what it’s best used for. And as people drove up, we handed them the information and answered a quick question or two. We had about 300 hundred people drive through that day.

Do you rely on residents to report storm damage?
Definitely. During a storm event, when staff is sitting in our emergency operations center looking at SeeClickFix issues coming in, we use the data to triage requests and walk high-priority ones over to emergency management staff. 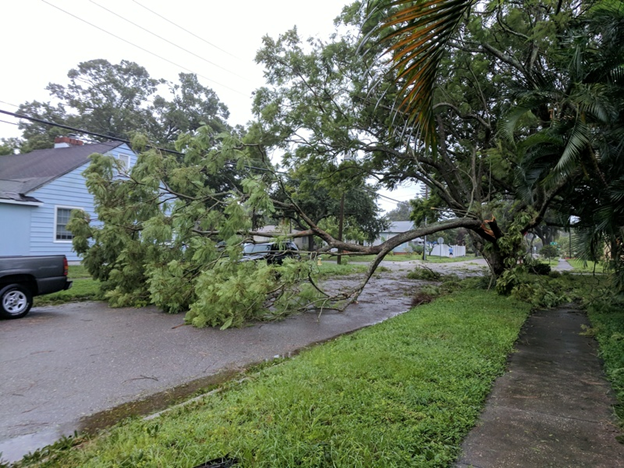 After the storm, we say, “Okay, SeeClickFix, show us the data for that three or four-day period of time. How many reports did we get? Where were they? How severe were they?” We collect that information and hand it to our emergency management team as a snapshot of what happened in our area. They then aggregate that information with all of their other emergency data and hand it up to the county. The county then hands it to the state which passes it on to the federal government which is all part of the FEMA reimbursement process.

How do you manage expectations when the City is flooded with requests?

Before SeeClickFix, we had an old work order system that didn’t provide for two-way communications with residents. This made it impossible to set expectations about when things would get fixed. Now after a storm we’re able to tell a resident that submits a request, “Typically, we get to this in two to three days. But given the large volume of requests we’ve gotten, it could be as long as a week.” With SeeClickFix, we can talk back and forth with a resident as much as we need to until their issue is resolved.

Have there been any surprises using SeeClickFix for handling hurricanes?

Our biggest surprise was that cell phone networks remained mostly up so anyone that had Internet on their phone was able to use SeeClickFix too. During Hurricane Irma, we found that residents were using the app the entire time and we had the data to prove it. And reports never stopped coming in even when we couldn’t go outside and take a look because the storm was right on top of us.

On top of that, there were three-quarters of a million people in our county without power for weeks. And even without power citizens were still able to communicate with us via SeeClickFix. That was probably the biggest surprise for me.

Do residents use SeeClickFix to help each other?

We’ve absolutely seen times where someone reports a problem and a neighbor pitches in and says they can help. Here are a few examples. Someone has a tree down and someone else has a chainsaw. Someone’s power is out, and they can’t keep their insulin cold, so a neighbor offers the use of their fridge. SeeClickFix is definitely a bridge for neighbors to help each other in difficult times.

Do you find that residents use SeeClickFix evenly across St. Petersburg?

We found since the beginning how valuable SeeClickFix’s data is for spotting trends and how easy it is to visualize that data on a map. One of the things we’re looking for is underreporting neighborhoods. Does that mean they don’t have any potholes? Does that mean they don’t have any broken sidewalks or sanitation issues? Of course not. They have the same issues as the rest of the city, but they’re just not being reported. 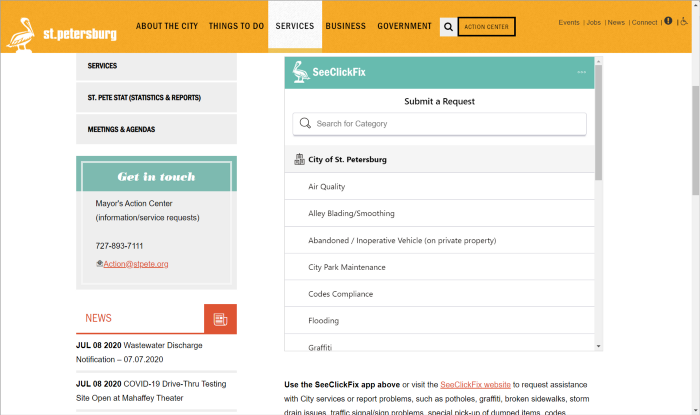 So, we then reach out to that community and say, hey, let’s come talk to your neighborhood leaders and let them know that SeeClickFix is a tool at their disposal. And how effective it can be by showcasing other neighborhoods. The good news is that not everybody has to be using SeeClickFix to make a difference. It just has to be a number of motivated individuals.

Do you see SeeClickFix as a trust-building tool for citizens and local government?

Absolutely. We say all the time when speaking with neighborhood groups or other organizations that SeeClickFix isn’t a silver bullet. A tool is only as effective as its users — in this case, residents and staff. So, we work all the time to encourage citizens to use SeeClickFix. But we also work internally to encourage city staff to make good use of the tool as well.

So, when issues get submitted, citizens trust that we’re going to acknowledge their issue, let them know along the way what’s happening, and let them know when their issue has been fixed. So, yeah, we absolutely believe that SeeClickFix builds trust. And that trust goes both ways. We trust the citizens to use SeeClickFix responsibly.

Want to see how SeeClickFix can help your community? Schedule a demo. 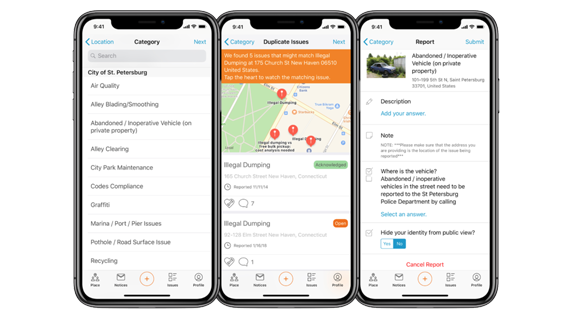